The amphitheatre at Aspendos is the best preserved ancient amphitheatre in the world. The great city of Aspendos once stood here, about 50 km away from Antalya.

The theatre was built by a local architect, Zenon, in the 2nd Century A.D, and has the capacity for 15,000 people. It has a two storey stage building and the cavea (the auditorium) is divided into two levels by a diazoma (a wide walkway). The acoustics of the theatre are so good that it is said that a ping pong ball dropped near the stage can easily be heard at the top row of seats. 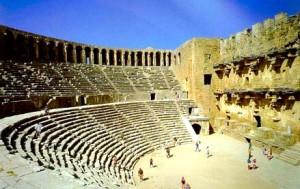 There are a couple of legends surrounding the construction of the amphitheatre, which relate to a king of Aspendos and his beautiful daughter, Belkiz. The king decreed that whoever built the most useful building in the city could have his daughter’s hand in marriage. All the local builders and architects competed to create something useful – and the king was very impressed with the aquaducts. However, whilst at the top of the building inspecting the theatre he heard a somebody whispering “The King should give Belkiz to me, he should give her to me”. When the king looked he saw a young man walking below in the theatre talking to himself … but the incredible acoustics perfectly carried his voice to where the king stood. He liked this so much that he gave his daughter to the architect. However, another legend says that he liked the theatre and the aquaduct so much, that he cut his daughter in two, and gave a half to each of the architects!

The building was used as a caravansaray (an inn around a courtyard) by Seljuk Turks for many years, and they repaired, maintained and protected the theatre.

The city of Aspendos was an important and wealthy town – coins minted as early as the 5th Century B.C have been discovered, and as such has been invaded and colonized many times in its history.

For all enquiries and bookings please e-mail kate@southern-turkey.co.uk or complete the online enquiry form